To Light Up The Night Sky

Informed Plea For Compassionate Use

Live or Let Die | Who Makes The Hard Decisions

Friday August 15th, 2014 – The Empire State Building, a shining and shimmering symbol of America in all of its finest industrial and business splendor, the most well-known spire of the New York City skyline, will illuminate green, white, and orange in honor of India Day.

Monday August 11th and Tuesday August 12th, 2014 – The building was ablaze with blue and light blue twinkles to try and woo the Democratic National Site Selection Committee in to choosing New York City as the host of the 2016 Democratic National Convention (per the official Empire State Building website “The Empire State Building does not light for political figures and campaigns”).

April 2nd, 2014 – For the 4th year in a row the lights atop went blue to help raise awareness for World Autism Day, even inviting Yoko Ono, the global ambassador for Autism Speaks, to the lighting ceremony and allowing her to flip the symbolic switch, turning the lights on. March 12th, 2014 – The color inspiration for that night’s display will forever be held a secret as it was a “private lighting”, as well as more “private lightings” on December 9th, August 20th, May 13th, February 24th, and a “private filming” June 1st and 2nd, 2013 (per the official Empire State Building website “The Empire State Building does not light for personal events such as birthdays, anniversaries or weddings”).

There are numerous instances of the building igniting a myriad of brilliant hues running the spectrum of the rainbow for Alzheimer’s, Breast Cancer, Child Hunger, Prematurity, and AIDS awareness. No one can discount the good that is being done by enlightening the public to these causes. However, “The Empire State Building is a privately owned building—not owned by New York City or the State of New York—and, therefore, has its own selection review and policies; Selection as an Empire State Building Lighting Partner is at the sole discretion of the ownership and management of Empire State Realty OP, L.P is under no obligation to provide specific feedback to any individual or organization regarding the status, merit and/or denial of its application; and selection as a Lighting Partner is a privilege, not an entitlement”. To understand the why of picking one philanthropic endeavor over another would be most helpful in garnering public acceptance of the selection practice and would assist greatly in the application process of individuals only trying to get their voices heard over the roar of the greatest city in the world. 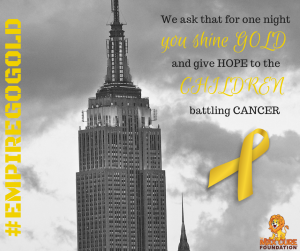 While entitlement is not what Childhood Cancer Awareness Month is all about, it is an entire 30 days dedicated to the little ones whose average age after being diagnosed with pediatric cancer is six. They may never get to see the radiance and magic that is the NYC skyline from anywhere other than a television in a hospital room. It is about getting the facts out to the American public that during the 8 hours the sky is brightened by a gold halo in support, 80 children will die from this disease with the misnomer of “rare” and the next day, after the lights atop the ESB have dimmed, 43 children will be newly diagnosed. When we lose, on average, 71 years of a child’s life who has died from the over 100 different types of childhood cancer, one night will not hurt in the grand scheme of things. But, it can definitely help. It can help immensely by spreading the word and gaining traction, consciousness, and a response from the public that for every $1.00 spent on research by the National Cancer Institute, only $0.04 is for pediatric cancers; Adults get $0.96 of every dollar.

As a building that stood as the world’s tallest for nearly 40 years, a great United States icon, a National Historic Landmark, and the main character in the story that shaped the Capital of the World, the owners (Empire State Realty OP, L.P) ought to understand the symbolism and sway they have over the American people. As the brightest structure within The City That Never Sleeps, taking one night out of an entire month dedicated to Childhood Cancer to glow with gold is going to influence an entire country and possibly the world. Recognition for this cause is as worthy as any other; it is as important as all of the others that have been given the time and energy – both literally and figuratively, and if the Empire State Building can take April 7th, 2013 to exude blue and yellow to honor Wrestlemania, there is no logical, emotional, rational, spiritual, corporate, or personal argument against shedding some literal and figurative light on Childhood Cancer Awareness Month from atop the steel and glass structure that embodies the perseverance of the American people – Children not included.