For Finn With Love – A Roar Beyond Barriers Story

Ties For a Cure

Tamlyn and Colm were already parents of a beautiful little girl named Eve who was five-years-old when she learned she was going to be a big sister. Tamlyn’s pregnancy was normal, and on March 1, 2014 she gave birth to a beautiful, happy little boy named Finn. 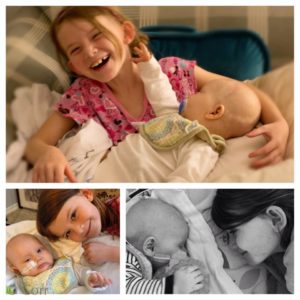 They were thrilled to have this new addition to their family, but little did they know, only 9 weeks later, they would hear four tragic words that change the lives of over 15,780 families each year.

Your child has cancer.

Finn was a normal infant, he was a little fussier and slept a lot more than Eve did at that age, but every child is different. After Finn’s 9-week check up his parents noticed some symptoms that caused concern. At first, his parents thought his fussiness, fever and diarrhea was due to the vaccines but by Sunday he was still fussy with fever, vomiting and not nursing well. They took him to the pediatrician that Monday and there was immediate concern about his lack of focus and constant fussiness.

Tests were ordered and the blood results indicated there could a mass in the brain. A CT showed a mass in Finn’s brain. At only 9 weeks old, little Finn was diagnosed with Immature Teratoma with PNET markers, a rare, aggressive and malignant tumor type. In May of 2014, at only two months old, Finn had his first open brain surgery, which resulted in partial tumor removal. His next MRI showed that in only 12 days there was aggressive regrowth in the resected area and the remaining tumor mass doubled, applying pressure to the optic nerve again.

Finn had his second open brain surgery only 14 days after the first, which resulted in a complete tumor resection. The medical team believed this was his best chance of survival along with chemotherapy and 3 autologous bone marrow transplants. Little Finn was baptized at his bedside due to three serious post surgical complications including blood clots, seizures and a small stroke.

Since then, Finn has endured heparin therapy, over 200 shots, five months of chemotherapy protocols, three autologous bone marrow transplants. During his last transplant his kidneys and liver function and a blood infection transferred him to the PICU, but he made a full recovery. It took 11 months of treatment away from home.

Not unlike many other childhood cancer survivors, Finn has experienced long-term side effects due to the treatments. He has lost a lot of high frequency hearing due to chemo drugs and treatment drugs including some antibiotics. Finn’s eyes are still a mystery. His right eye is healthy but has nystagmus so his depth perception will be a challenge throughout life. His left eye remains a challenge in that he has intermittent lagophthalmos (the inability to close the eyelid completely). Up until a few months ago, he often slept with his left eye slightly open, which dries the cornea if not lubricated constantly and can create serious abrasions.

He’s developed multiple abrasions and it’s been an unending challenge to heal his left eye. They are seeing an ophthalmologist and talk about temporary options until he’s older and when more permanent solutions are available. Feeding therapy and NG tube weaning is one of their other great challenges. It’s a slow but steady road.

“This journey has been tiring, long and emotional. We are truly blessed to have the support of friends, family and the social supporters in our lives. They have given us strength and hope, and we will continue this journey with them by our sides. Finn has an award worthy constitution and a boundless spirit that never ceases to inspire. We feel the hope and love from all of them.”